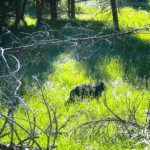 I like to peer into rabbit holes and go bumbling around in fields of weeds. This morning I started in a 1912 tome, Paris, Described by Great Writers, by Esther Singleton.  Digging around in this literary excavation, I unearthed a quote by Victor Hugo.

And above all do not pick and choose. Contemplate at random.

I began to contemplate my random pick of Ursula K. Le Guin’s story, “The Lost Children”.  Le Guin applies more imagination than any one person has a right to possess to the old Pied Piper story. When your inner child escapes because she notices something you are not paying attention to, might she get so bored with you she does not return?  Does she stay at the edges of your world, or get lost in the weeds?

Pulling together an old legend with a modern psychological construct refreshes an old story. It’s a lovely example of cross-fertilization. Hmmmm…

I went in search of a simpler word to describe this process and got buried in the science of biology. I came up with gamete, a germ cell with some specific characteristics I don’t choose to elaborate, but how apt is this word? Le Guin took the germ of an old idea and created something new.

Gametic, adj. [my definition] a mature idea capable of initiating the formation of a new thought.

I’ll spend the rest of the day trying to figure out how to use this is a sentence.