Former university professor Susan Aylworth describes Chico, her hometown of 38 years, as a small-ish country town with a major state university all plopped into a rural, agricultural setting. The rich mix of rural-vs-urban, town-vs-gown produces creative tension that works nicely for plotting purposes. Susan enjoys researching backgrounds and careers for her novels. “It’s one way to live many lives all at once,” she says.

Being married to  a newspaper reporter who has covered the public service beat for many years is a major plus.  When Susan hatched an idea for a paranormal murder mystery, Chico’s  just-retired chief of police sat her down and made sure her plot fit what police had seen happen locally and helping her with police procedure. That’s primary research! 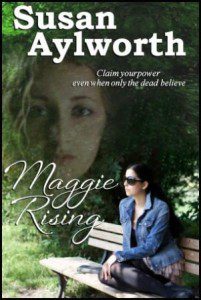 A paranormal mystery with sass

Maggie Rising  is a contemporary story about a 17-year-old high school senior who grew up learning the art of psychic reading from her Great Aunt Betty. Now in her senior year, she works part-time as a psychic reader, hoping to put herself through college, but it’s just for fun. There’s no such thing as true psychic awareness . . . or is there? When Maggie befriends a ghost and is arrested for her new friend’s murder, the two girls—one dead and the other in jail—have to solve an ugly crime and persuade the police to believe them when they discover the truth. And Maggie thought calculus would be tough!

A fertile setting for any plot

Susan believes is is easier to research stories set in the present, but she points out that Chico’s rich history make it an idea setting for historical fiction as well: the Gold Rush, a brief flirtation with Hollywood that led to a series of movies shot in the area, the discovery of “Ishi, the last wild Indian” just a few miles away, opium dens under the city streets, a major WW II air base and later, a Trident missile base, and a myriad of other little bits that may make their way into future Maggie stories.

Susan says she is a Steinbeck fan, but she also likes the more modern works of Greg Sarris who writes about California’s tribal people in the twenty-first century.She points out that  a number of popular authors have used  California beaches for romantic settings on beaches and thinks our valleys and the mountains lend themselves to love stories as well.

A snippet from Maggie Rising

I used to be a regular at the Thursday night Farmer’s Market. It’s really more like a street fair and it’s one of the things I like best about Chico. The Hmong farmers with their tomatoes and melons and rainbow-colored chard work side-by-side with local bands performing original music, next to neo-hippy artisans selling soaps or candles or ceramics or tie-dye and always reminding me of my mom. Beekeepers sell honey and beeswax, and two or three times a night there’s a flash mob of jugglers or belly dancers. I sighed and wished I was there, hanging with the guys from school, eating the kinds of junk food Mom won’t let us have at home, acting like a kid instead of pretending to be older and wiser than I am.

Susan is the  property of a protective mutt dog and servant to two spoiled cats. She lives in northern California with her husband of 43 years and  loves hanging out with her seven children, their perfect-for-them spouses and 21 grandchildren, soon to be 23. When she can’t be with her blood family, she hangs with her fictional characters, the children of her mind. She has eleven books available and a 12th scheduled for publication in June 2014.

“I love travel, great music, and perfect raspberry jam,” she says. “I especially love hearing from readers.” Reach her at susan.aylworth.author@gmail.com, post on her wall at: www.facebook.com/Susan.Aylworth.Author or follow her @SusanAylworth. She welcomes ideas for new books and characters.