In Ephesians, the Play’s the Thing 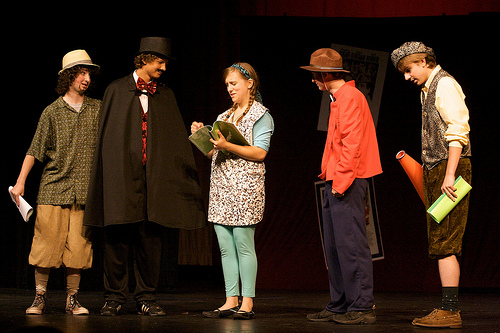 I saw something new in this week’s study in  Ephesians. Being a theater buff, I had to go there. Contrary to popular opinion, creation is not a clock God wound and walked away from to pursue more interesting activities. Creation is a big cast, full-scale production performed before a celestial audience. I draw this analogy from Paul’s prayer for the Ephesians, 3:7-21 (ESV).

The play, of course, is a mystery. Cast in the lead role is Jesus Christ, a member of God’s production staff. His credentials are his “unsearchable riches”–there is no limit to the “breadth and length and heights and depth” to which this man will go to shed light on the “the plan of the mystery hid for ages in God who created all things.” Rulers and authorities in heavenly places, Paul tells us, have box seats for this production, which runs for eternity.

God has intimate involvement with this project. He wrote the script and has underwritten its production with the blood of Jesus Christ.

In addition to his role as lead actor, Jesus is involved in the whole process. He helped with the original set design and serves as director. His job is to pull from the actors a display of the “manifold wisdom of God” in ways that connect with the audience.

As stage manager, the Holy Spirit breathes life into the production. His job is to make it all work. Everything he does is designed to strengthen the inner being of the cast so they may be bold and confident in their delivery.

There are parts for everyone. Those who are willing to accept direction and learn their lines will be cast in speaking roles. Everyone else has at least a walk-on part, which, when “rooted and grounded in love,” can become fuller “according to the power at work within…”

Only the writer knows the whole story, but if the actors give it their all, they will experience “the love of Christ which surpasses all knowledge,” and “be filled with all the fullness of God.” Union wages. Open casting call, until further notice.