The Turkey and the Princess 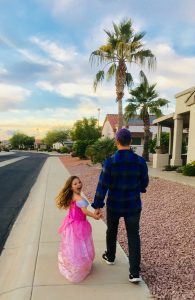 Prepping and roasting a turkey is an exercise in faith. Did I buy the right bird? Should I follow the instructions on the packaging or on the recipe I’ve chosen? The directions vary widely. The package says to roast the turkey at 325 degrees until the pop-up timer pops up (about  2 1/2 to  3 hours). The recipe says to roast it at 500 degrees for half an hour and then tent the turkey and drop the temperature to 350 degrees. So my choices are to undercook it or overcook it?

I tend to overthink things. The variables involved in roasting a turkey are legion. Is it fresh or frozen, natural or organic, stuffed with something edible or something that is meant to be discarded? Does that make a difference? And what about the timing?

Should I prep it early in the morning, shove it back in the frig, join the family for a movie or a walk in the park, and pop it in the oven after that? After all, the purpose of this whole exercise is family togetherness (and thankfulness, should I put out paper and pens so everyone can come to the table prepared with their lists?) And, what if I get a late start? It might take hours to cook. What we start snacking and drinking wine and forget we have a turkey in the oven?

Coordinating a turkey dinner is not a walk in the park

I chose option A because I couldn’t come up with an option B. We got coffee at Starbucks and went to the civic center park to let the five-year-old blow off steam. While the younger generation showed off prowess on the monkey bars (I’m speaking of the 44-year-old), hubs and I  took a walk around the lake, which registered well on my FitBit. All good.

Back at our desert home, I fired up the oven, shoved in the bird, and busied myself sauteeing giblets for gravy, steaming green beans, and a thousand other tasks designed to bring a meal to the table seamlessly. Then it happened. The pop-up timer popped up an hour early! I grabbed a kitchen thermometer from the drawer and inserted it into the thigh. The thermometer confirmed that indeed the temperature had reached the requisite 65 degrees. Could that be? Should I trust the clock, let it cook another hour and risk dishing up a dry, overcooked turkey? Or should I trust two thermometers and risk serving a raw bird? Saying a prayer, I pulled the luscious-smelling ten-pounder out of the oven and told hubs to start carving.

The princess makes her entrance

While I was busy enlisting my soon-to-be daughter-in-law to start the roue for the gravy, my son alerted me to the imminent presence of a surprise guest. Hiding in the utility room waiting to make her appearance was the five-year-old, resplendent in a princess costume. When we were able to take our attention off of meal coordination, her attendant (said son) alerted the royal princess (said five-year-old who had earlier masqueraded as kitchen help and snapped the green beans). Beaming, she made her entrance down the short hall into the small kitchen and was seated at the Thanksgiving table. The food arrived, the blessing was said, and the princess, grinning with pleasure, polished off an entire turkey dinner.

The turkey, roasted to juicy perfection, was delicious.

← View from the choir pew: Thoughts on Allhallowtide Shopping for Christmas? →