My staff has suggested I tell my life story. Though I rarely post on my Facebook page, I’m told my fanbase is growing. (I’m too lazy to check.) So, here goes: 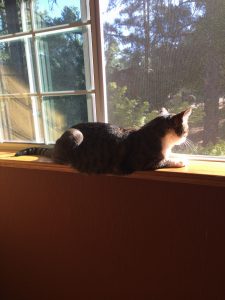 I was born in a barn in Chinese Camp, a Northern California Gold Rush town that once housed thousands of Chinese laborers. Historians say these immigrants worked mines that yielded a total of $1.5 million in U.S. dollars. But, that’s history. Today, Chinese Camp is Historical Landmark 423, population 126, not counting me. I don’t live there anymore.

My birth mother had many liaisons that resulted in multiple children. She did her best, but after she weaned us, we were pretty much on our own. Mom’s landlady called me a runt because I was the smallest of my brothers and sisters. My siblings made a habit of crowding me out at mealtime. As a result, I developed some wicked hunting skills, my ticket out of town it turns out.

Caged and carried away

Although I was not “to the manor born,” the landlady did supplement our diet and saw to it that we received basic healthcare. Still, as our numbers grew the day came when she felt she had to find other homes for us.

I was a happy boy when I had a ranch to roam and hidey holes to curl up in. But one day, the landlady lured me into a cage, threw me in the backseat of her car, and drove up Old Priest Grade Road. I’d heard the stories: bodies of unwanted offspring dumped along the road, or worse–drowned in canals! My heart beat fast, and I yowled in fear!

From the front seat, the lady crooned, “It’s okay. You are going to some very nice people. They paid seventy-five dollars to an agency that matches adoptees with your skills to folks who need pest control.

I’m getting the boot because I’m a pest, and now I’m expected to be pest control? I thought to myself. I need to get control of this situation.

She said some nice words about me to the person who came out to the car, then handed me over. I heard her say she’d be back in a week with my brother if she could catch him. That lifted my spirits somewhat. For now, it would be two of them against one of me, But, when my bro got here, we could plan our escape. I’m smart, and he was a thug. We made a good team, which was funny because I heard they planned to name us Bonnie and Clyde.

The new people had instructions to lock me in a little room in the house for a week before releasing me to the wild. Scary! I’d never been in a house before. They put me downstairs in an enclosed porch with windows I could look out and a comfy towel to sleep on. The food was good! By the time my bro showed up, I had it all figured out.

My captors visited me often in my captivity. When they made a fuss over my big green eyes, I flirted. I rolled over and showed them my pristine white tummy. I cocked my head, curled my front paws around my pink nose, and purred.

“He’s so cute and lovable,” the female said. But her next words gave me a chill. “This is not what we asked for.”

Had I misjudged the situation?

“We asked for mean and ugly so that we wouldn’t get attached, remember?” She told her male counterpart. “He’s supposed to live outside, catch mice, and avoid us.”

Did I play it wrong? Wasn’t that what I wanted, too? When I slid my eyes over to the tall guy, I sensed I had an ally.

I was so grateful when my bro showed up. I tried to snuggle with him, but he was having none of it. And he wouldn’t make up with the people, either. After another week of captivity, our captors released us.

We ran off. We explored the forested terrain and discovered it hadn’t been moused in quite awhile. Heaven! I stayed away from the big house for a couple of days and then went back to nibble the kibble the people put out for us. Kibble is interesting. You can’t play with it like you can tease a mouse before you dispatch it, but it satisfies. That was a mistake on their part. I learned to enjoy the handout. I still caught mice and played with them, but I let them live so I could catch them another day.

My brother and I parted ways over my behavior. He ran off, and I never saw him again. 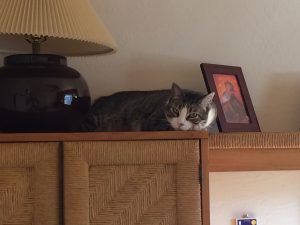 I enjoyed forest romps and dirt baths, but most of all I liked to tag along after the big guy when he went to his shop. He’s a lot like me, curious, likes to play with things that have moving parts, maintains an intense focus on things that interest him. The female makes me nervous, though. She’s all over the place. I never know what she’s going to do next.

One rainy day,  I was huddling on the front porch when she opened the door, and I got my first good look inside the house. What a palace! Warm air, tantalizing smells, spaces to hide, places to jump up on–wowzer! I put a paw over the threshold. The female stepped aside. That was my first clue that people might be trainable.

I entered the house s l o w l y, explored a bit, and scooted back out. I repeated my actions, staying a little longer each day. Finally, I decided to move in. Over the next few weeks, we negotiated terms, and I started their training program. But, that’s another chapter in my story.