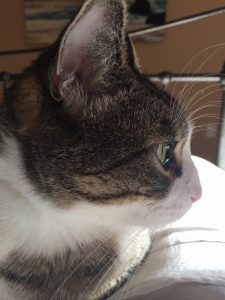 Clyde here. No proud feline who’s done well for himself fails to give back. Because the response to My Life Story, Guest Post by Clyde was so enthusiastic, I’ve directed my ghostwriter to write a second chapter. My sincere desire is to inspire my feral and semi-feral brothers and sisters to lead healthier lives by using their human resources wisely.

How to recruit, train, and retain your human resources

In all modesty, I seem to have an instinct for good staff management. My philosophy is simple:

Once you’ve identified an easy mark humans who sympathize with your cause (self-preservation in the form of food, warmth, and comfort), engage them with the gift God gave you–cuteness. Widen those big eyes, perk up those adorable ears, and purr like the dickens. Purring makes humans feel they’ve gained your trust. But don’t be fooled. Sure, they want to pet you because you’re so cute. But they aren’t ready to take you on as a dependent.

Why do humans resist the commitment to make your welfare their work? Here are three reasons:

Assure them that YOU ARE DIFFERENT!  Don’t give them reasons not to enter your employ.

About the allergies; your initial interviews with staff probably took place out-of-doors. Any sneezing they attributed to tree pollen. After you move indoors, they may try to finger you as the source of their discomfort. Don’t let that keep you from being cuddly. They’ll either develop a tolerance or find medications to help them cope.

You’re in! Now it’s time to orient staff to your internal clock. For example, I like my morning meal at 4:30 am, supper between 1:00 and 2:00 pm and snack no later than 10:00 pm. I require a fresh bowl of water poured over crushed ice and served separately from where my food dish sits on a high counter. I like my water dish placed on the floor, preferably in a traffic pattern where people trip over it. That guarantees several refills, which prevents my water from getting stale.

Morning routine: Consider staff assignments carefully. Mornings, it only takes one lick on his nose to rouse the guy from a sound sleep. Up he gets and feeds me. I’ve tried to wake the female. She buries her nose in her pillow. I stiffen my front legs and thump her in the kidneys with my feet. When I do that, she takes a swing at me. I don’t do that anymore.

Afternoon routine: I wake up from my morning nap, find the guy and stare him down. He stops whatever he’s doing to refill my food dish. Then I hit a few golf balls against the baseboards and go back to sleep.

Evening routine: I transfer to the guy’s lap and gaze into his face like he’s God. (That’s a good staff retention technique.) When I decide it’s time for everyone to go to bed, I hightail it down the hall toward my dish. If they don’t follow, I return and sit straight and tall in the middle of the room. I blink my eyes, look at the clock, walk circles around the guy’s recliner, run down the hallway–eventually they get the message.

By the time they turn in, I’ve scarfed my snack. I do my stretches on their bed and wait until they settle in for the night. Then, it’s time for my workout. I like to exercise late at night, in the dark. I wrestle rugs, pry open cabinets and slam them shut, jump to the top of the shower and walk on top to test my balance–a guy has to stay fit.

Happily, the staff accommodates my routines most of the time.

In the next chapter, I’ll talk about how I manage my staff’s wanderlust. I’ll also introduce the special people who fill the gap when the staff takes a vacation without me.