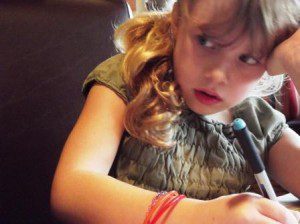 Enjoying short stories is a legitimate pastime, perhaps even a trend if I judge correctly by the number of websites devoted to the short story form. Writer and Storyglossia.com editor Steven J. McDermott says:

A novel may take you deeper into a particular perspective than a story will, but if you read an equivalent number of story pages, all by different writers, your perspective on life is certain to be enlarged more than it would have been from reading a single novel, or perhaps even several novels.

The Creative Penn features a guest blog on How to Write Short Stories.

Fairy tales are a type of short story populated with fantasy characters; for Oscar Wilde, a statue with a heartbeat, talking birds, and seasons that know when they are welcome and when they are not. To my mind, rhythm, repetition, words of wisdom—and often darkness— characterize fairy tales.  From “The Happy Prince”:

There is no Mystery so great as Misery.

A satisfying read about a young girl learning who and what she can trust. Who was the neighbor your mom warned you about—the one who listened to you, offered you something good and opened new worlds to you?

The protagonist finds the leftovers in his dead mother’s refrigerator more appealing than what’s left of his marriage. A predictable ending. Made me sad.

The year 2000 marked the first publication of Best New American Voices, an anthology that chooses stories from nominations submitted by MFA programs, writing workshops and summer conferences. I suppose Lisa’s story also ends predictably, but it made me laugh out loud. I wanted to tell the protagonist, honey, life is messy. If you can’t live with mess you will end up like your mother, with only you for company. Oh well, at least she won’t have cat hair on her couch.

John Updike’s prose makes me yearn for a resurgence of literary fiction with a plot. I want things to happen in a story, but I like spending a little time contemplating the curves in the street, especially with Mr. Updike for company.

High concept imagination—where has your inner child escaped to? Do you play with her in the mundane places she has escaped to, or has she gone further and been abandoned? This might be one of my favorite stories.

This story either began life in a workshop and grew up to be a novel, or was an excerpt from a novel in progress. The novel by the same name was published in 2002. It’s a timely read, given that Cuba is starting to open up. I was intrigued by the title and read with an ear for the “Aha” moment, which I anticipated before she actually dropped the line. Nice way to engage the reader.

← Bumbling Around What About Love? →