The first is a series about stories set in the Golden State.

Daniel Acosta finds the heart of his story along the Southern Pacific Railroad tracks at the foot of the San Gabriel  Mountains. Fiction writer and playwright Daniel Acosta was born and raised in San Gabriel, California. The son of first generation Mexican-American parents, Daniel writes stories that reflect his Mexican-American neighborhood and community.

A dead hobo, a racist cop, and an ex-con uncle are the axes around which my novel-in-progress revolves. The novel’s working title is Iron River, which represents the railroad tracks that play a pivotal role in the story.

The narrator is twelve-year-old Manuel Maldonado, Jr., known to the members of his Mexican-American community as Manny or Man-on-Fire for his red hair and the port-wine stain that is his birthmark. “Man” and his boyhood friends are haunted throughout the novel by the prospect of going to prison for killing  the hobo.

The novel is set in the 1958 Los Angeles suburb of San Gabriel. Man and his family and best friends live in the Mexican-American quarter of the city; his home is across the street from the Southern Pacific Railroad tracks. The setting  allows for the exploration of racial prejudice, family crises, and the adventures of a powerless adolescent boy.

One element of the topography of the novel is the San Gabriel Mountain range north of the city. One of the mountains seems to have a feature that resembles a heart with an arrow piercing it. This motif surfaces throughout the novel. In addition, the railroad tracks not only are the element that precipitates the action in the story, they represent Man’s helplessness to change the trajectory of his young life. 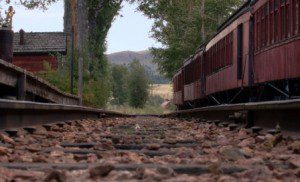 This novel has autobiographical elements throughout. There was significant research into the operations of the Southern Pacific, the criminal justice system, and some local history. I have changed names of some places in the novel, and those familiar with the Mexican-American San Gabriel neighborhood in the novel–and in which I grew up–will still recognize my veiled references (with amusement, I hope.) To others the fictional changes will go unnoticed. As to the accuracy of the setting, I have exercised artistic liberty and plead not guilty of inaccuracy.

Physical fiction with a California flavor

For me, Jack London, Mark Twain, John Steinbeck, and other California writers have mined a kind of physical fiction in which I am excited to work. This kind of fiction is not the interior, contemplative fiction of the East, but a robust, fiction of action and physical conflict that allows a more external character development.

He didn’t say anything right away, just looked at the mountain for a long time.  “Whenever I look at that mountain, it reminds me how many times I broke my mother’s heart. That’s the worst part of things. That’s what I hate the most about my life.” He was talking to the mountains. I looked up at him and just listened.

“All my life. Everything bad that I ever did. Like that arrow going right through her heart.” He had his hands in his pockets. Then he took them out and put them in front of himself so he could look at the back of his hands. The knuckles were boney and red. He went over and at down in the hobo chair. He looked tired now.

“Sometimes I wished I was never born. For your Grandma, you know? Like if I wasn’t born her life would be happy.” He waited a second to think about something. “I don’t want you to do this or anything, okay? Just because I told you. It’s not no way to solve your problems so don’t try it, okay?”

I didn’t know what he was talking about, so I just said okay.

“One time when things were going real bad I went out to the tracks and just stood there between the rails. I wanted the train to just hit me and take away all the trouble I caused. I thought about it, what it would feel like, you know? When the train hit me. I thought it would hurt like hell for just a split second then no more pain, you know? Maybe it would be
like drowning. I wanted to drown myself on those tracks just to stop causing pain to the people I love. “But I didn’t have the guts.” He stopped talking again.

By this time I was sitting on the arm of the hobo chair. I wasn’t looking at him. We were both looking at the broken-hearted mountain.

My next project will be set in an industrial section of Los Angeles, and it promises more of this environment-as-metaphor motif. I am excited about starting it soon. It will be somewhat autobiographical, but it will necessitate more research than I undertook for Iron River.

Daniel Acosta attended Catholic grammar school and studied in a religious order before leaving the religious life and becoming a high school English teacher. After a 34-year teaching career, Daniel retired in 2007 to pursue his dream of writing fiction. Daniel is married, the father of four adult children, and lives with his wife Linda in Rosemead, California. He is putting final touches on his novel, Iron River.