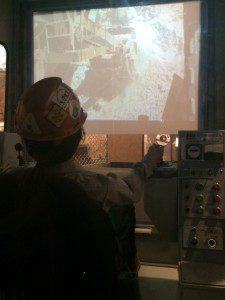 The quality of its museums is often an indication of the health of a town. Little Bisbee sits in a box canyon on top of over 5,000 miles of mine tunnels. We heard that from a tour guide who guided us through Copper Queen Mine, a man who actually worked in the mine before it shut down in the Seventies. He took us through the technical history of tunnel building and ore extraction. As the technology advanced, safety records improved.

WE’VE ALL HEARD THE HORROR STORES OF LIFE IN THE MINES, but there is another side. When I asked our guide what he liked best about working in the mine, his eyes lit up.

“I did the same thing every day,” he said.

“Yes I did. Every day, the working conditions were different.”

He never got bored. He used his brain as well as his brawn. A different image from the usual Hollywood fare.

MULES WERE EMPLOYED IN THE MINES to schlep the mine cars. When the bosses tried to add additional weight to what the mules were trained to pull, the four-legged workers went on a sit-down strike. They won!

Eventually the mules would start to go blind, a side effect of living in a dark mine for years. When a veterinarian detected the condition, he outfitted the mule with blinders and led the animal out of the mines. The blinders had tiny pinholes that the vets enlarged as the weeks went by. Eventually, the mules regained their eyesight, but they were never sent back to the mines. Instead, they were adopted by the townspeople as pets or put out to pasture on local ranches where they could kick up their heels in retirement. 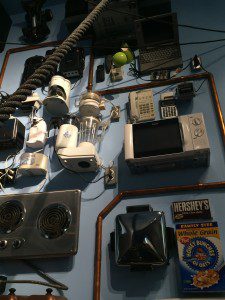 Products from the past that used copper

The best conveyers of local history are docents who tell stories from their experience rather than a memorized script. Pop into a museum for recommendations on what is worth seeing, or answers to questions you may have about the area you are visiting. The Bisbee Restoration Museum displays donations of artifacts that have been lovingly restored. Clothes, furniture, toys, jewelry, typewriters, recording equipment and so much more–all tell tales about the past.

Why is Bisbee is so vibrant after the boom when so many others are ghost towns? Upscale bistros and boutiques, art galleries, antique shops, and coffee houses dot the town center that celebrates its 1,000 stairs instead of apologizing for the climb. The town folk decided to preserve their history as the center attraction. I imagine there were infusions of money from sources related to the cleanup that followed the mining activity, but it takes pride and planning to restore a town after an economic downturn.

If you want a true picture of the past, present and future of a town that intrigues you, scout out its museums and listen for the stories.