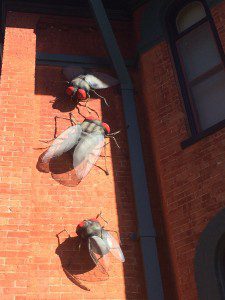 What’s the story? In a bid to rid the town of pesky flies, a newspaper ran a contest. Send in your dead flies. Winner with the most gets a prize.

Museums curate stories and tell history in interesting ways. On a recent trip to Bisbee, AZ, we found a gem of a museum. The Bisbee Mining and Historical Museum, a Smithsonian affiliate, presents the town’s boom or bust history from multiple points of view: bankers and businessmen; waves of immigrants; engineers and politicians; and consumers like you and me who use products that contain copper, like light switches, on a daily basis.

The evening before our visit to the museum, we sat across the street at The Table and watched through the window as patrons poured through the museum doors to celebrate a gift. The Bank of America made permanent a donation of the entire mineral collection that had been on loan to the museum.

WHEN ARIZONA WAS MAKING A BID FOR STATEHOOD, their viability as an economy was in question. Wasn’t the territory a desert wasteland with a frontier population likely to burden the American economy? Arizona sent an exhibit of over 300 minerals to the Chicago World’s Fair and a few years later became the youngest state in the Continental U.S. Easy to see why the sparkle of gems like azurite and malachite and the intricate matrix of chocolate brown colors in Bisbee Blue turquoise caused Americans to reconsider.

THE GREAT DEPORTATION STORY is shocking, no matter what your politics.  When the miners went off to war, recent immigrants took their place. Many of these workers were from Europe, where a workers movement had been successful and was spreading to our shores.

On July 12, 1917, a posse of 2,000 recently deputized men rounded up 1,185 strikers and sympathizers and interviewed them quickly. Seven hundred workers agree to return to the mines. The rest were loaded onto 23 cattle cars, deported to New Mexico, and told not to return. Surprisingly, the roundup was not particularly violent. Only two men lost their lives in the skirmish, one on each side.

How would such unrest play out today?

← In Ephesians, the Play's the Thing Find Good Stories in Museums: Part II →